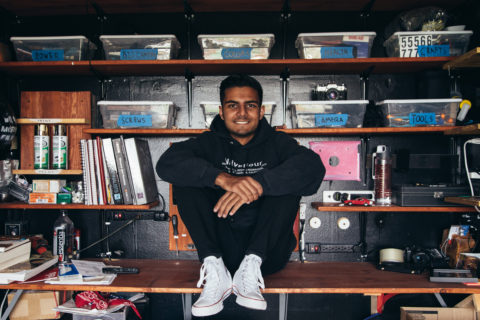 INDIANAPOLIS (December 18, 2018) — This December, Alpha Kappa Psi recognizes Brother Dilan Mistry, Chapman ’17 as the student spotlight. Dilan is a sophomore at Chapman University, located in Orange, California, majoring in business administration and minoring in leadership studies. Growing up on the coast of Los Angeles, CA, Dilan’s interest in photography and film grew organically. His adolescent interests and desire to build lasting connections paved the way to his membership in Alpha Kappa Psi and to building his latest business, NativeFour.

In high school, Dilan became involved with “Live From 205,” the school’s nationally-acclaimed broadcast journalism program. From there, his large support network of family and friends encouraged him to pursue this passion at Chapman University. Dilan didn’t plan to attend Chapman for the entirety of his four years in college, though. Instead, he wanted to take classes there for two semesters and transfer to a different university.

Early on, Dilan understood the value of networking and building meaningful connections with people. While sitting alone in his residence hall, a particular organization’s tent caught his eye from the window – Alpha Kappa Psi’s. “It said ‘Professional Business Fraternity.’ I went down to check it out, and it was the first day of rush. I had no idea what a professional business fraternity was until that day,” Dilan reflects. After attending each recruitment event that week, Dilan accepted a bid and eventually became a brother. “It was a surreal process, I just went in to meet new people,” however because of the relationships he’d built in AKPsi, he decided not to transfer from Chapman. Instead, he stayed enrolled, met more people, and founded a business based on his personal values and passion.

In November 2017, Dilan met Brandon Ptasznik, “I saw a guy with a Coachella shirt on and we started talking. We had shared interests and began working on projects together.” Dilan’s and Brandon’s shared desire to make a difference in Hollywood and beyond set the foundation for what is now known as NativeFour – a creative agency that produces branded content, such as commercials and music videos, and manages a variety of artist. “On the outside, it looks like a typical creative advertising agency. But the meaning behind it is so much greater,” Dilan explains. The NativeFour team is a collective of passionate individuals who want to make a lasting impact on the world. The goal is to produce content that has a cause to inspire change. Dilan recounts, “I didn’t think we would start this as freshmen, but I’m lucky that it fell into place early on. We ran with the idea and didn’t look back.”

As a new brother, Dilan is actively involved with the Rho Chi chapter’s Bridge to Brotherhood program. During an interview with a pledge, he was asked about his favorite part of AKPsi. “For me, it’s not all about getting my resume critiqued. It’s not all about becoming better at interviews. For me, every day, there is always a group of brothers outside of Beckman Hall, where the majority of business classes are held, always hanging out and representing the Fraternity.” This has tremendously affected Dilan’s experience on campus, “It’s an amazing family to be a part of.” When offering advice to new brothers, Dilan notes, “Relationships are everything. At the end of the day, it’s not about fame or money but people you know.” Dilan stresses the importance of meeting people for the right reasons, “Meet with people and build friendships. Not for recommendation letters, but for who they are. Everyone has a story.”

In the near future, Dilan plans to continue operating NativeFour as well as pursuing new initiatives. As far as AKPsi, he was recently elected the chapter’s VP of Alumni and plans to enhance the alumni/collegiate member relationships. “Above all, I can’t stress the importance of meeting people and maintaining relationships. Alpha Kappa Psi has helped me realize this, too. Friends and brothers are everything. Alpha Kappa Psi has a very unique place in my heart.”

Headquartered in Indianapolis, Alpha Kappa Psi Fraternity was founded in 1904 on the principles of educating its members and the public to appreciate and demand higher ideals in business. With more than 240,000 brothers, Alpha Kappa Psi currently has 226 campus-based chapters and 43metropolitan based alumni chapters across four countries. Learn more about the oldest and largest co-educational professional business fraternity.  Alpha Kappa Psi is recognized as the right organization of principled business leaders.