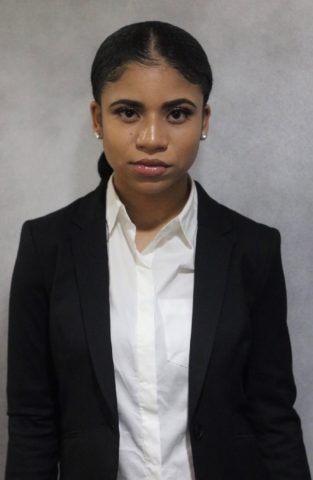 INDIANAPOLIS – (September 22, 2018) — Twenty-year-old junior, Tori Cariah, was initiated into the Pi chapter at Georgia State University in spring 2018. Shortly after becoming a member of Alpha Kappa Psi, she decided to contribute to her birthplace of Bermuda by hosting a women’s empowerment event. “What’s The Tea? A guide to Becoming a Successful Woman” started as an Instagram blog called PG Movement, but quickly became the face of a women’s empowerment group built by a young woman who found her voice in the realm of discomfort.

A junior at Georgia State, Tori fills the roles of professional chair of Alpha Kappa Psi’s Pi Chapter and Event Coordinator of the Bermuda Delegates Association. On social media, Tori manages her blog, PG Movement, which features motivational, health, and beauty posts. She studies middle-level education and credits much of her prospective career path to her family. “Most of my family are teachers, so that’s what I decided to do,” Tori mentioned.

Tori explains that Bermudians sometimes succumb to groupthink and complacency easier than they should due to the tightknit culture on the island, “We call it ‘Bermudian Mentality.’ To get out of this mindset, you have to make yourself uncomfortable.” Discomfort has been the driving force behind the success Tori has had in college so far. During her sophomore year, Tori applied for and competed in the Miss Phi Beta Sigma scholarship pageant on her campus. Tori recalls, “I wanted to get involved but I didn’t know what direction to go into. I didn’t know many people and the only activity I was involved in was a step team for freshman girls. My discomfort led me to do the pageant anyway.” Her membership in AKPsi follows a similar sentiment. “I saw the promotion on campus for rush week, so I went the day before applications were due and met everyone. I’m very happy I did.” Even her middle-level education major has been elevated – Tori not only wants to finish her Bachelor’s but also complete a doctorate program.

Tori reflected on how AKPsi has influenced her college experience and personal growth, “I learned how to command presence in a room and introduce myself. I became more proactive and comfortable with presentations.” Joining Alpha Kappa Psi gave Tori the confidence she needed to turn her blog from a passive idea to a tangible event for her audience to attend. “Panel discussions are very popular at Georgia State,” she says. The model was a perfect fit for her event. She invited eight women to be panelists and give advice to the group. In the future, Tori will host the event annually in Bermuda and hopes to partner with schools and churches, so the PG Movement becomes a recurring program at those institutions.

Currently, Tori is working to collaborate with a high school in Georgia to implement a Lunch and Learn program where brothers within the Pi Chapter will educate youth about professional etiquette skills. She hopes to have a little this fall and plans to mentor a freshman woman through an on-campus group called Quiet Storm. Tori intends to expand, learn, and evolve as an individual, a businesswoman, and a brother of AKPsi.

For other young women looking to make a difference, Tori recommends going after every goal believing you will achieve it and without waiting for permission.

“Stay positive and believe in yourself. Have the mentality that you have already won. If you believe you can make the change, you will make the change. Don’t wait for someone to tell you that you can do it. Tell yourself.”