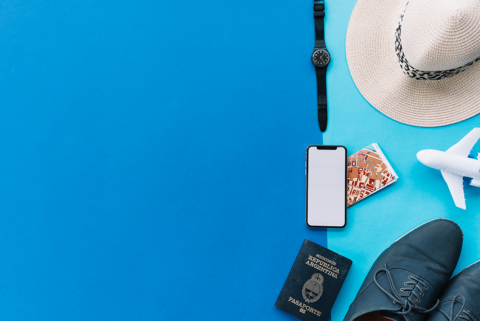 Whether for work or vacation, there’s always something liberating about heading out into the world to travel. However, if you’re not staying organized while on the road, it can quickly make things feel like a burden and limit your ability to maximize the fun during your trip. Maybe it’s the overstuffed bag, or an unfinished to-do list left back at home; whatever the reason, a lack of preparation can ruin a trip before it even begins. With a little bit of foresight, you can avoid feeling out of sorts and spend time focused on your new surroundings. Before you board that plane or hit the highways, check out these tips to stay organized while traveling and maximize the fun!

If you’ve ever tried to find a last-minute ticket home for the holidays, you’re probably familiar with the sensation of sticker shock. However, buying a ticket months in advance may not save you much more. According to Forbes, you may end up shelling out an extra premium payment, while other fliers benefit from waiting for low prices during ticket sales. After a study by travel site Cheap Air, researchers found that within the continental U.S., the best time to maximize your travel budget when purchasing a ticket was, on average, 70 days before departure. However, that figure changes depending on the season, with the optimal window for winter at 62 days, spring 90 days, and summer 47 days.

In the 2009 film Up in the Air, George Clooney plays a corporate downsizer who basically lives out on the road – and loves it. Throughout the movie, he preaches the idea of traveling light through a series of motivational speeches. Though this is used as a metaphor for his approach to life, it also has very practical applications when it comes to maximizing time by only packing the essentials for a trip. Keep in mind that small items like pillows, toothbrushes, phone chargers, or headphones can be purchased at airports or at your eventual destination.

Though Forbes lists July as the busiest travel month of the year, the winter months can be just as tricky. Not only are you navigating holiday plans and high-ticket prices, but you could also be facing a depleted stock of paid time off. According to HR firm Enhanced Recovery Company, the average number of paid holidays offered by employers is nine or 10. While we all want to keep these days until absolutely necessary, it’s difficult to get through those several-month stretches of time without a paid holiday or a mental health day now and again. Maximize your paid time off, and try your best to begin the trip in the middle of the week. By doing so, you’ll be able to utilize a weekend instead of burning two more days off.

Trade in Cash for Apps

When traveling, especially with coworkers, there’s a good chance you’ll be dining out a lot. Regardless of whether it’s a hearty meal after a long day of sales calls or a much-deserved round of drinks after closing an account, it’s not uncommon to find one person picking up the tab. Instead of carrying cash in your wallet, or – worse – having to pay pesky ATM fees to pay back the other party, there are plenty of mobile payment apps that can make splitting the check a breeze. Check out popular services like Venmo, PayPal, Square Cash, or Zelle. They allow you to send instant and secure payments to other users that deposit directly into their bank accounts or even onto a debit card.

While it can be a stressful experience, staying organized and prepared can make travel a breeze. Rather than worrying what you’ve forgotten, how much you had to spend on your ticket, or whether you’ve left things at home in good standing, a bit of planning can let you maximize your trip. So, recline that seat and relax, now that you’re ready to roll.