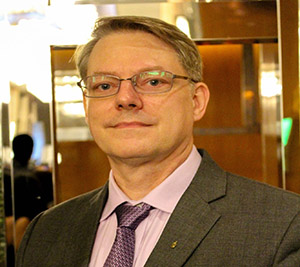 INDIANAPOLIS (April 30, 2018) — In celebration of Volunteer Appreciation Month, the Fraternity recognizes the Foundation Board of Directors’ Stephen Smith, Florida ’86 – Life for his contributions to the fraternity. Learn about Stephen’s journey to Alpha Kappa Psi membership, his progression through volunteer roles, and advice to students, volunteers, and alumni.

Stephen:              Currently I teach English and sometimes management at Mahidol University in the Faculty of Information and Communication Technology in Bangkok, Thailand. I also serve as Student Activities Program Leader for the Faculty. I have been there for 14 years this month. I have lived in Asia since 1995, seven years in Fukuoka, Japan and 16 years here in Thailand. I graduated from the University of Florida in 1987 with a BSBA in marketing and a certificate in Latin American Studies. I was born in New Jersey, grew up in Florida, I have now lived more than half my life abroad.

Stephen:              I was invited by one of my first university friends, She was a dorm mate of one of my high school friends who ended up becoming a [Delta Sigma Pi.]

Stephen:              I was a lousy pledge. I missed a lot of meetings and activities, and it was difficult getting to know over 150 brothers, as well as my fellow pledges.  Luckily, I had some strong support among key brothers.  The reason for my weak participation was due to my workload.  In addition to a full course schedule, I worked 30 hours at one job Burdines Department Store (now Macy’s) and 20 hours at another textbook on campus called Vocal Eyes. We read the textbooks for students who were blind or otherwise unable to turn pages in a text book. I continued with Burdines until 1992, after I graduated. If I were in many student chapter pledge classes, I probably would have been cut. Alpha Phi chapter was a very large chapter so it was difficult for me to meet all the brothers. These are often things many student chapters currently cut pledges from the pledge program. I like to use that as an example because I was a lousy pledge, but have I been a lousy brother? Have I been a lousy alumni brother? Cutting people out of a pledge program doesn’t mean you are cutting the weak links so to speak. Unfortunately, I see a lot of chapters who are overly critical of the pledges that go through.

Stephen:        I started my first semester as a brother serving as the Chairman of the Professional Committee, followed by being elected the Vice-President of Administration, and finally the Alumni Secretary (the precursor to the current VP of Alumni Relations.)

Stephen:        I don’t have a favorite. Probably the VP and or the Alumni Secretary. Vice President because one of my roles was staffing and monitoring all the committees. I was in charge of the ACR. I enjoyed that. But Alumni Secretary was the springboard for all my work going forward.

Stephen:        Wayne Miller (former South East Regional Director and former fraternity president) asked me to help revive the Beta Pi Chapter at the University of Miami.  They were down to about a half-dozen brothers and really needed a kickstart.  (I had moved to South Florida for work).  That led to being appointed District Director (Chapter Advisor today) of Beta Pi Chapter as well as Theta Mu at Stetson University.

Stephen:        4-5 years. After that, I became the Section Director (Regional Manager today) of Alumni programming for the South East Region. The structure of the organization was much different back then.

Stephen:        I am currently serving on the Alpha Kappa Psi Foundation Board of Directors, elected at the Foundation Members meeting at the 2017 Las Vegas Convention. I wanted to get involved with the Foundation for quite some time. I thought it would be a logical next step for me. But I had not considered serving on the Board until I was asked by Mark MacGibbon, Portland ‘96. He asked me three years ago to consider nominating myself. I was not elected at the 2015 convention, but it did give me something to think about. And the more I thought about it, the more I thought I could make a difference. I also currently serve as the President of the ASEAN Alumni Chapter (serving the 10-member nations of the Association of Southeast Asian Nations), which was AKPsi’s second international alumni chapter. Additionally, I am transitioning off the Board of the Greater Gator Alumni Chapter – the first student chapter specific alumni chapter in the fraternity.

Stephen:        One of my hobbies is genealogy. I like to research my family history. What got me started on this was when I was living in Japan and our old AKPsi website, you were able to pull up a list of those alumni who were considered lost. At the time, the UF chapter had 6000 lost alumni. In about two years, through LinkedIn, through Google searches, Facebook, and the University of Florida alumni directory, I probably found over 3000 of the 6000 on the list. I’m approximating numbers, but I know it was well over 2000 closer to 3000 names I found. Sadly, a lot of the names were found on the Social Security Death Index. But cleaning up those lists got me back involved with the fraternity. When Marie Lawrick, Boise State ’85 – Life, sent out a call for volunteers in 2010, I sent her a message and said “I know I’m overseas, this is my idea. If you could use my help, I would be happy to help.” Since then, I got pulled back into the fraternity as an active volunteer. When I discovered a large number of alumni living in South East Asia, and the fact that most of these alumni were considered lost by the Heritage Center it really got me hooked on researching and finding all of these international alumni. That’s what got me into it, and that’s what got me to post marriages, awards, and promotions. Discovering the Google Search alerts gets me to post what happens within Alpha Kappa Psi.

Stephen:        EASY QUESTION.  I would like to see Alpha Kappa Psi become an even bigger player on the international stage. In 5 years, I’d like to see at least five more international chapters. At least one more in Hong Kong would be a smart idea. I think the UK is very prime for expansion – Thailand and Italy. I would also like to see a much more active alumni base. For example, I can see us having a mobile application where alumni can list their companies and attach them to Google maps. There’s potential, we’re just not there yet.

Stephen:        Don’t burn yourselves out.  Know when to step back for a few months or even a few years to take a breather. Volunteer opportunities will always exist when you want to return to a full-time volunteer position. I graduated in ’87, moved to Japan in ’95, and there was nothing I could do to stay involved. Once I discovered email and the internet in ‘96, that’s when I started getting more involved with my home alumni chapter, the Florida Gold Coast Alumni chapter, I was one of the founders of that chapter. I started getting involved through the Yahoo group I established. I started an official volunteer position as the Section Director of Alumni Relations in 2010.

Stephen:        Take advantage of all the opportunities that you can.  You will never know where your true path lies until well after you graduate.  Also, don’t judge your pledges too harshly.  Sometimes the worst pledges (me) can become the most active student and/or alumni brothers (me). Sometimes the best pledges become the worst brothers, being suspended or leaving the fraternity.

Stephen:        Volunteering does not have to take a lot of time.  You can a serve as a mentor, officially through one of many chapter-led mentorship programs, or unofficially through the plethora of social media groups.  You could also volunteer to be a guest speaker, case competition judge, CAB member – all of which does not take a lot of time. You can also get involved in an alumni chapter…there is a minimal time commitment for many alumni chapters, supporting the chapter once or twice a year at an event – social, charitable, or professional – is a great way to keep up your network and give back. If you don’t know how to volunteer, talk with a current volunteer, the Heritage Center, or even start up your own little project.  That project that you start could get you noticed for even more exciting endeavors.

Stephen:        I have at least two more years on the Foundation board. I really think it’s going to take me about a year and a half to learn what I’m doing and get a foothold. Once I am established, I’d like to continue one more term. After that, I don’t know. I would love to have a chapter here in Thailand. Thai universities are becoming more and more international and they want more and more international organizations. Alpha Kappa Psi would be a great tie into that.

Stephen:        So far, I am really enjoying being on the Foundation Board of Directors.  There is a steep learning curve for me as I have been in academia for more years than I had been in business. However, I strongly believe the Alpha Kappa Psi Foundation has the potential of continuing to support the members of Alpha Kappa Psi in a multitude of ways.  I hope that I will be able to continue connecting brothers worldwide and re-energize them about Alpha Kappa Psi so that they will become life-long supporters of developing principled business leaders.