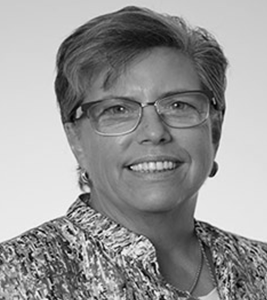 Eileen Howell, Wisconsin ’78, joins the show today to discuss her climb up the ladder at multiple companies within the oil and gas industry, and her many firsts as a female in her professional career as well as her fraternal experience with AKPsi. Eileen also walks listeners through her own acronym and other tips about leadership.

Eileen is a graduate of the University of Wisconsin – Milwaukee, holding a master’s in Tax. Eileen recently retired as the Director of Tax at Powell Industries Inc., an international electrical power equipment manufacturer headquartered in Houston, Texas. Prior to that, she spent six years with Paradigm, an international oil and gas software company starting as the VP of Tax and moving into the CFO position. Eileen spent the major part of her career, over 22 years, with Schlumberger, an international oilfield service company, holding numerous tax positions in the US, Singapore and the UK. She began her tax career in Milwaukee at Arthur Young and Company.

She joined Alpha Kappa Psi’s Delta Phi chapter at UWM in 1978 and eventually became its first female chapter president. She joined the AKPsi Foundation Board in 1987 where she became its first female president. Eileen was elected to the Fraternity Board of Directors in 2001 and served as Chairman of the Board during 2005 and 2006. She is a proud recipient of the Silver Distinguished Service Award and the Gold Distinguished Services Award, the highest honor bestowed on a member by the fraternity. Eileen currently resides in Missouri City, Texas with her husband. She is a fan of golf, college football but most of all, her granddaughter.