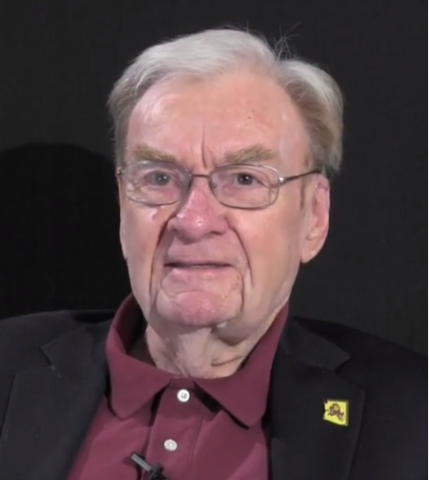 Harold (Hal) White was initiated as a faculty member of Alpha Kappa Psi 61 years ago. He was instrumental in the founding of Arizona State University’s Iota Xi chapter, and has made an impact on countless students, faculty members, and friends across the country. This article is about Hal’s professional life in academia and his involvement with AKPsi.

Hal was born in 1931 in northeastern Washington in a town called Colville, near both the Idaho and Canadian borders. His family later moved to Walla Walla for his father’s car dealership business.

In the 7th grade, Hal met Lucille (Lucy) Angell, the girl who would later become his wife and the love of his life. “Lucy was just one of those girls in class, you know. Our freshman year of high school, I was smitten, and she was the only girl in class,” recalls Hal.

At the end of Hal’s sophomore year of high school, his father passed away. His mother remarried and the family moved to Pendleton, Oregon, about 45 miles away. Hal and Lucy went off to college in two different towns, but he had finally worked up the courage to ask her out.

“I want you to be my girlfriend, but you do not seem to be interested,” Hal told Lucy. “But if you ever want to see me, I’m gonna come running. And she called, and I came running.”

Hal and Lucy dropped out of college and were both 21 when they married. The next year they had their daughter, Angela. Hal joined the family business. But this wouldn’t last long, as Hal saw the need to continue his education.

A harpist and a Ph.D.

Hal returned to school at the University of Oregon and received his master’s degree at age 29. He went on to teach at Idaho State College. At Idaho State, Lucy completed her degree.

Idaho State had an active Alpha Kappa Psi chapter, which happened to be one of the top chapters in the country at that time. In 1960, they invited Hal to be initiated as a faculty member of AKPsi, and he served from 1960-1963. Then in 1963, Idaho State College was renamed Idaho State University. To teach at a university, Hal would need to have a Ph.D.

The family moved to Gainesville, FL and Hal received his Ph.D. from the University of Florida. At Florida, his first scholarship was under Russ Jordan, the director of the school’s teaching hospital and clinics. Hal was selected because he was an AKPsi alum and Russ was a past national president.

During Hal’s years in school, Lucy was employed as a legal secretary, university secretary, and grade school teacher. Then the family moved once again to Arizona (where they would remain) in 1966, where Hal became a professor of management in the college of business at Arizona State University.

While Hal had become an academic, Lucy was a musical talent. She was an accomplished violinist, and eventually learned to play the harp. She played the harp professionally for 30 years, and played at many ASU events.

“People would say, ‘are you the husband of the harpist?’ not was the harpist my wife,’” Hal recalls with a smile. He reflects lovingly on the fact that she was a harpist with the maiden name “Angell.” 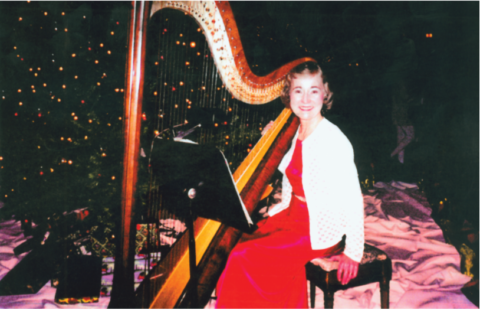 Lucy White pictured with her harp.

At the time Hal joined ASU, there was not an AKPsi chapter. But he recalls there were about 18 or more student groups in the college of business, including Delta Sigma Pi.

“A few years later, there were two transfer students from Idaho State who came to ASU and they were outraged that there wasn’t an Alpha Kappa Psi chapter. They looked to faculty to help start one and I discouraged it! There were already so many clubs. But they didn’t pay any attention to me and went on to sign up 40 students,” recalls Hal.

One of the students recruited was Steve Vasquez. “Hal really helped us organize as a colony early on and put together the Iota Xi Chapter. He was and always is so open to helping the students out,” Steve says.

The Arizona State chapter was founded in the spring of 1972. Steve remembers how involved Hal was right from the start. “Our first year as a chapter, we had regional meetings and the southwest regional meeting in Tucson at the University of Arizona, and Hal volunteered to take a bunch of us down in his car and helped us out with some of our expenses. That’s just one of the ways he dedicated himself to the chapter.”

Steve ended up becoming chapter President, and in 1975, his chapter awarded Hal with the Silver Distinguished Service Award, which still hangs on his wall today.

After three years as a faculty advisor, Hal decided to step down and asked his trusted colleague, Elmer Gooding, if he would be willing to step into the role. He agreed, and asked another colleague, Lonnie Ostrom, to be co-advisor. Together, they helped the students build Iota Xi up to a 100,000 points a year chapter.

Hal went on to become president-elect of the ASU faculty senate in 1980, and president the following year. Then in 1982, Iota Xi approached him again to be faculty advisor and he agreed, going on to serve for three more years. In 1994, the chapter presented Hal with the Second Degree Silver Distinguished Service Award. “I was quite honored,” he said.

“He and Lucy were very supportive of all our activities, and always went above and beyond. He was more than just a chapter advisor,” Steve recalls. “For me personally, he was very supportive when I was in college. I worked full-time at a local supermarket, and Lucy would shop there every week. I always felt that I had an extra ear to listen to my concerns or help me in my own professional development. That’s just the type of guy he has always been to all the brothers.”

He’s still that guy, even in retirement

20 years ago, Lucy was diagnosed with Alzheimer’s disease, and she passed away of complications in 2012 at age 81. Hal says that she always maintained her sweet and kind disposition throughout her illness.

Today, Hal lives in an assisted living community, where, despite his degenerative muscle disease, he stays active in his community and keeps his mind sharp. He exercises twice a day, 6 days a week. Every morning he drives his power chair half a block away to his parish for mass. He’s also involved with the men’s Catholic service group, Knights of Columbus. He’s an avid reader, and a member of a monthly book club in his assisted living community.

“It’s all women and me. They like to read fiction and I’d rather read history and biographies, but it’s a social opportunity. They were so encouraging to me to continue and said “‘we’d like a man’s point of view!’”

Hal still stays in regular contact with AKPsi brothers, like Steve. He has attended several events over the years, including anniversary celebrations for the ASU chapter and the Convention in Phoenix in 2011. 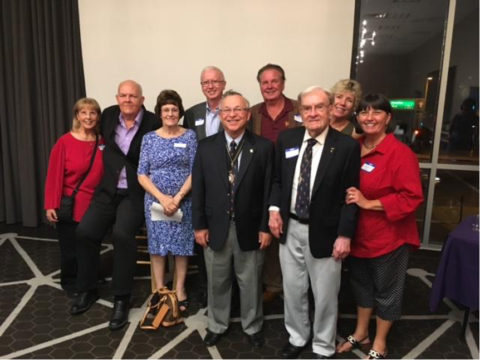 “One of the biggest things about Hal is he is an exceptional active listener. At just the right time, he will provide advice or other ways to think about something. He’s that way even to this day,” Steve says of his longtime friend and mentor.

How You Can Support Organizations Important to Hal

Donate to the Alpha Kappa Psi Foundation to help create impactful educational programs, scholarships, and grants that empower members to live with purpose and exceed their potential.

Currently, more than 180,000 people are living with Alzheimer’s disease in Arizona and southern Nevada. Consider making a donation in Lucy White’s name, to help provide education and support to all those facing Alzheimer’s and other dementias.