This year we celebrated the 45th anniversary of AKPsi allowing women to join the fraternity!  But did you know, it took several years before the opposition was finally defeated?

In 1972, President Nixon (and AKPsi brother), signed Title IX, which states that no person, on the basis of sex, can be excluded from participation, or denied benefits, under any educational program or activity receiving Federal financial assistance.

A Title IX exemption was introduced and in 1973, the Fraternity Alliance for Inalienable Rights, a 17 member organization which AKPsi was a member, was formed to oppose Title IX for professional fraternities.

During Convention in 1975, Alpha Kappa Psi initiated a fundraiser to combat Title IX, and a write-in campaign to attempt to sway legislators also began. A committee for female membership was created and proposed the Fraternity should bar women due to the Title IX exception legislation.

However, when it became apparent that non-inclusive legislation would not be approved, it was actually the Board of Directors that voted on August 7, 1976, to admit women into the Fraternity.

“Given the exposure we had to the business community-at-large, we could no longer deny women the same right to learn as we had learned.” John Eppinger Jr, Jacksonville ’75 Life 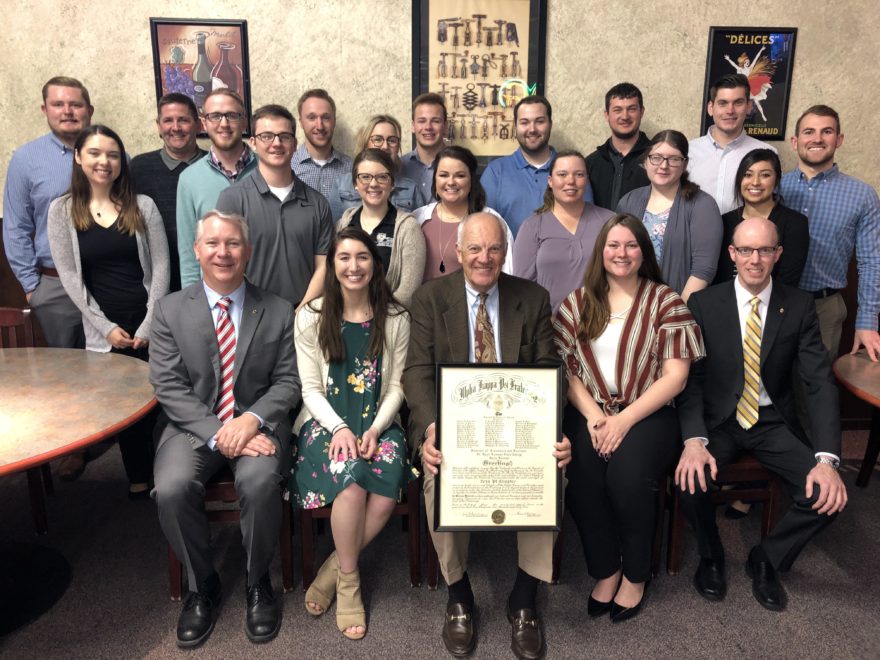 Anderson said he visited his alma mater to have an opportunity to talk to students who are still abiding by the principles and values he put in place 55 years ago.

His visit began with a tour of campus and a walk down memory lane with current Zeta Pi chapter members. Anderson even gave a speech, detailing his career and the importance of a work-life balance, which he understands as a father of four.

“It was an incredible experience to connect with one of the founding members of Zeta Pi and to see and hear their successes after leaving the university,” said brother Kattie Jenik.

Jenik said the chapter hopes more alumni will visit and tell their stories to the student members who are still learning and writing the first chapter in their lives.

Since graduating in 1965 with a bachelor’s degree in business, Anderson began a long and impressive career in insurance, including a decade as the chief executive officer of Fremont Life Insurance Company from 1986 – 1996. He also spent time as the senior vice president of Americo Life, Inc., managing marketing and sales operations. Anderson is retired now, residing in Paso Robles, California.

Dabin Park’s life is guided by one principle: to meet the highest ideals. Now, that compass has led him to the South Korean military.

Park, a Western Washington University alumnus and Omega Beta chapter member, recently suspended his MBA studies to move home to South Korea and join the military. He hopes the military experience will prepare his mind and body for a career in journalism, which he said might be the most dangerous field of them all.
After a stint in the military, Park wants to pursue freelance work, allowing himself the freedom to travel and report on various issues around the world, such as world hunger and human rights violations as well as their causes.

“The professors were excellent, and I had good relationships with the deans and the staff, and yet something didn’t feel right about pursuing an MBA,” Park said. “At the same time, personal challenges during the time made me realize that I feel strongly about truth and honesty. With the current atmosphere around free press and journalism, I wanted to transition myself to be a part of a field where the values I hold close is one of the main motives for the field’s existence.”

“As MLK stated, ‘Injustice anywhere is a threat to justice everywhere.’ I want to go where justice is being violated and share the facts to the world as a journalist,” Park continued.

Journalism is quite a career shift for the 24-year-old. Park graduated in 2017 with a degree in business administration, something he had always gravitated toward because of his belief in a business’s positive impact on economic development. He entered Willamette University’s early MBA program to focus on finance and marketing, working to become a successful capital manager.

On this new path, Park will spend time as a mandatory service enrollee before committing himself as a professional soldier to one of the seven special forces brigades in the South Korean military. He hopes to improve his Korean language and enhance his cultural knowledge through this experience as well.

“(It) seems like I threw away comfort and practicality for idealism, knowing ahead of time that I will probably come up short,” he said. “What keeps me confident on this track is knowing that this is the path of highest ideals for me, and even when we know we’ll come up short, we should strive for it anyways, right?”

Because Park does not have formal journalism education, he plans to use this time to
experiment with photo and video journalism and build relationships.

Park joined Alpha Kappa Psi in 2016 for a sense of community and professionalism. He was also a 2016
Academy Fellow.

“The experience of spending time with brothers from all over the world was incredible. There were brothers from
every part of the US and a brother from the U.K. as well as India. Learning and bonding in beautiful and humid
Indiana for a week with those brothers (at the Academy) is still a sweet memory I look back on,” he said.