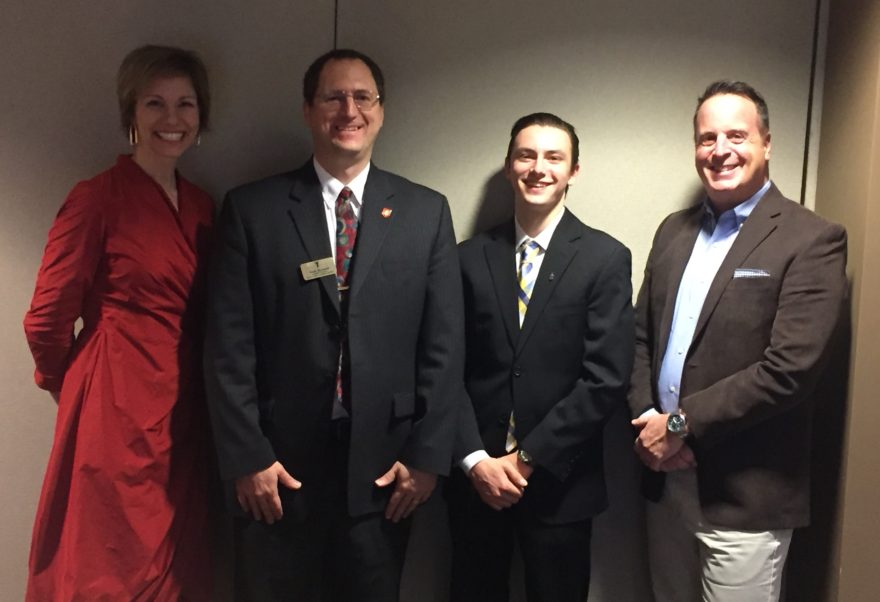 During the last weekend of February, Ball State University’s Career Center and the Upsilon Chi Chapter teamed up to engage students to participate in a day full of professional development.

In previous years, the Upsilon Chi Chapter’s Professional Palooza and the Career Center’s Career Connections were held separately but aimed at similar goals. During the summer of 2016, the two groups decided to combine their efforts to provide Ball State students with one uniform conference. The Career Connections Conference had better funding than Professional Palooza, so by collaborating, they were able to bring in more professional speakers, have a catered meal, receptions, and produce high quality marketing materials.  The most exciting difference to occur between the conferences last year and this year was student turn out.  The Career Center reported more students were in attendance during the collaboratively planned conference than the combined total of both conferences last year.

“The Career Center began this conference aspiring to engage second year students in professional development,” said Dean Branson, Assistant Director KEY Careers 2.0. “We still hold to that aspiration, but allow students of all class levels to participate. Conference funding is made possible by the generosity of the Lilly Foundation through Ball State’s Cardinal Connect Grant. Our goal is to connect educational partners to help students integrate their curricular and co-curricular experiences and package them in a way that empowers them for a lifetime of post graduation success.”

Sam Kinsel, Ball State ’16 took on a major leadership role with planning and execution of the conference with the Career Center. “Sam’s willingness to take on this challenge was a significant factor in the event’s success,” said Branson. “He dedicated himself to regular planning meetings with me and communication with the AKPsi chapter was critical.” Not only did Kinsel play an important role in the event, but the entire chapter was willing to put in significant effort. The chapter was able to promote the event peer to peer which had a tremendous impact in bringing students together.

The members of AKPsi who were previously responsible for planning the Professional Palooza worked closely with the Career Center staff to identify potential speakers and establish a working schedule. Their biggest challenge was during the summer months of collaboration. With the students out on summer break, communication was challenging – but not impossible.

The Career Center and the Upsilon Chi Chapter are eager to work out the kinks in the planning process and hope to continue the combined conference next year.